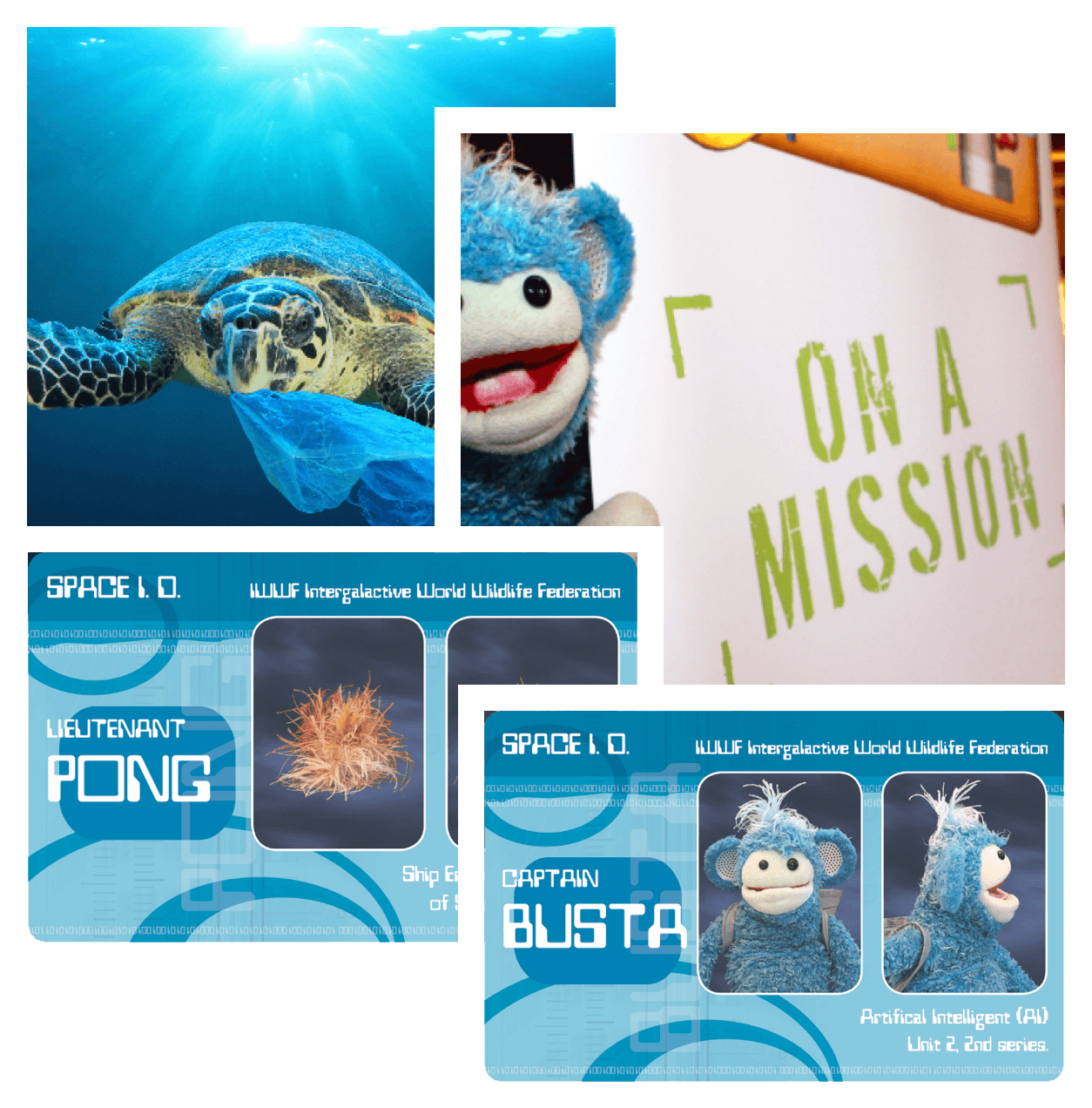 The Intergalactic Waste Federation identify Earth as an endangered planet. Humans are mis-managing the planet’s resources and all eco-systems are being affected.

Captain Busta, a Planet Caretaker and his trusty sidekick, Lieutenant Pong – together, the crew of star-ship Pong-E-1, are sent to investigate.

On their first adventures, they witness the devastating effect of rising planet temperatures on miles of bleached coral reefs in the Coral Sea, the disrespectful way many humans treat the natural world and the plastic pollution engulfing, entrapping and harming birds and marine life across the Indian Ocean and Andaman Sea. There, they meet an underwater photographer, Katy, who has also seen this and whole-heartedly agrees to help them on their mission.

Captain Busta wanted to tell everybody that the planet needs protecting. Katy explained humans communicate through telling stories and movies. They needed a little help to do it, so the photographer asked all her friends for their help and they made some new ones along the way.

They decide to tell the children of Earth that litter things matter. That all the small things we do every day, like recycling and not littering, can make a big difference.

Katy registers a not-for-profit company called Wastebuster to help them on their mission to find out how to protect the planet.

Researchers at Surrey University and 600 young people agree Captain Busta has a special mission (and they write an important report about the movie is ‘social norming’ recycling for children).

Busta is invited to show his film to 58,000 young people in 230 primary schools by Surrey County Council. This was so exciting that Lieutenant Pong made lots of bad smells and Captain Busta has to open the spaceship windows without getting sucked out into space.

A website seems like a good idea to Busta as Earthlings seemed to communicate pretty well using the world wide web.

Captain Busta helps children understand why they should be little Wastebusters to care for the environment and his Planet Protection Pack helps teachers tackle waste in schools.

Wastebuster and WRAP work together to produce lots of resources to help teachers get wastebusting in schools. Captain Busta and Lieutenant Pong front the ‘Recycle now Schools’ campaign. More than 2,000 schools downloaded the resources.

6 more local authorities sign up to the Wastebusting mission.

Wastebuster education centres are made in 2 big recycling centres around the country with Viridor Waste management in West Sussex and Donarbon Waste Management in Cambridge. The Wastebuster education centres are visited by more than 20,000 children each year, who learn why it is important to be Wastebusters. One of the centres earns a Learning Outside the Classroom (LOtC) award! Captain Busta and Pong have a little party and Pong puts a whoopy cushion under Busta’s captain’s chair and everybody laughs when he sits on it.

West Sussex County Council signs up to the first Wastebuster schools education programme for local authorities and 57,000 children are invited to join the mission! 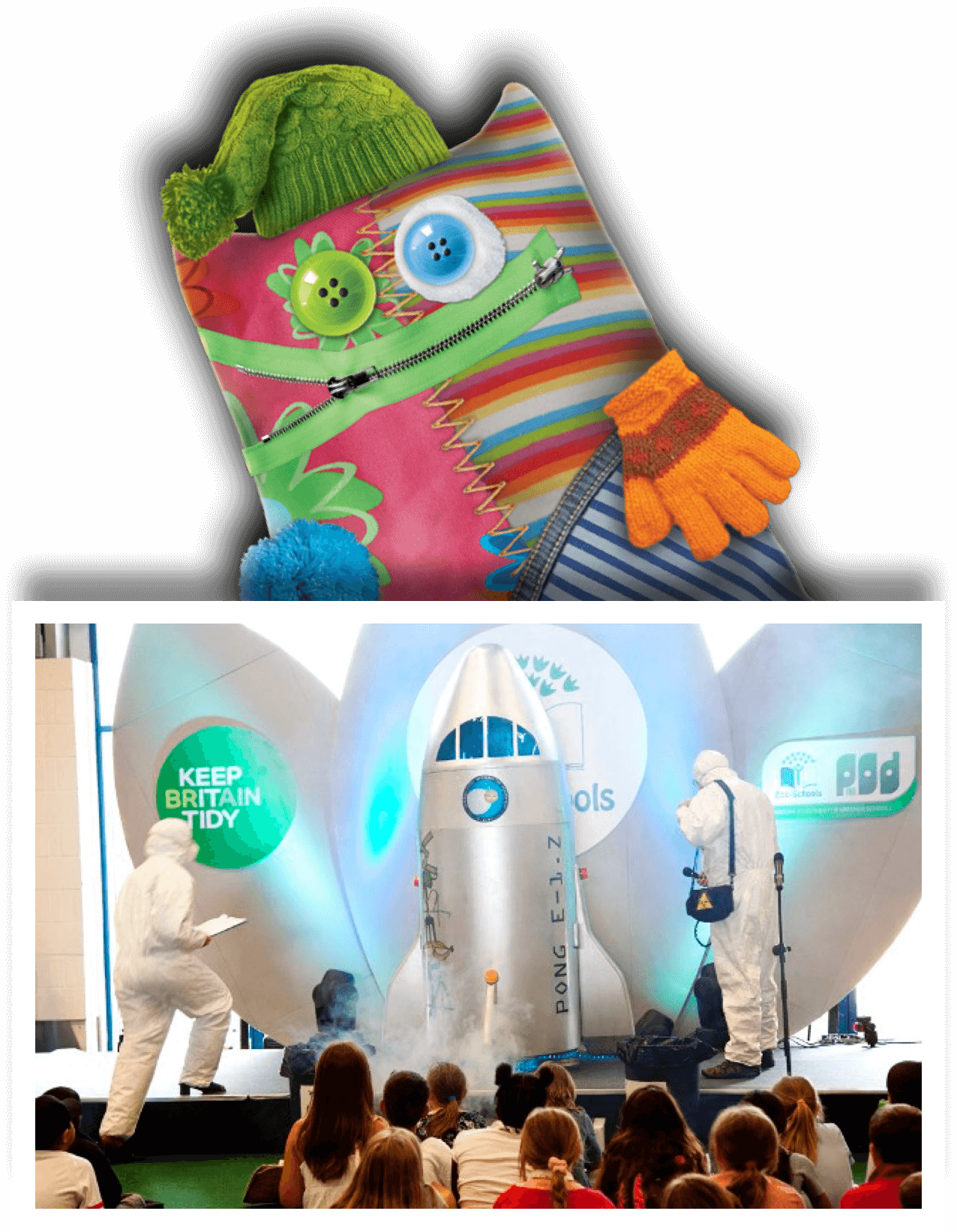 Captain Busta helps schools to go green and get sporty for the London 2012 Olympic Games, by exchanging unwanted textiles for new sports equipment.

Surrey County Council and 11 district and borough authorities sign up for the programme. With 12 more local authorities signing up to the Wastebusting mission nationally, an additional 1000 schools are engaged in the full service and localised campaigns are delivered in each area.

Wastebuster teams up with London 2012 to deliver the national ‘Sport into Schools’ campaign to enable more schools to participate in sports by recycling.

Captain Busta goes on a roadshow to schools across the country with Olympians to inspire children to go green and get sporty This is very exciting and Jamell Anderson, a team GB basketball player teaches Busta to spin a basketball on his finger!

Wastebuster teams up with Eco-Schools to promote waste education to schools. Busta lands his spaceship with NASA operatives at the national Eco-Schools conference and in his exiting show, he gets all the children busting moves to the Busta and Pong recycling song!

Captain Busta gives children a chance to help beat plastic pollution by telling world leaders their ideas and seeing their best ideas made a reality.

Wastebuster works with Plastics Europe and Bayer Material Science to hold the ‘Primary Earth Summit’ in UK Parliament, as a formal European Green Week satellite project for the European Commission.

Wastebuster teams up with The Pod, EDF Energy’s programme for schools, the British Science Association and Middlesex University to give over 20,000 schools the chance to swap unwanted textiles for new science equipment. 2000+ schools register to take part in the campaign. 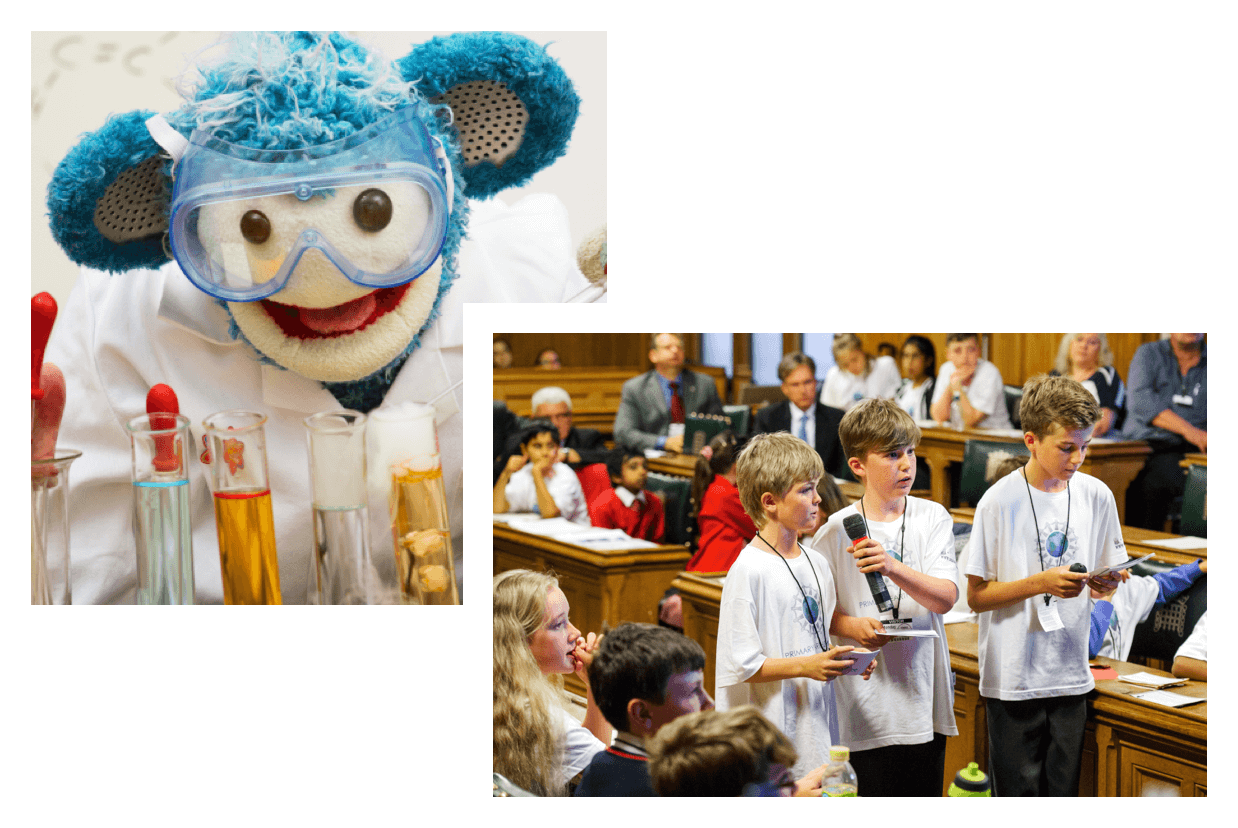 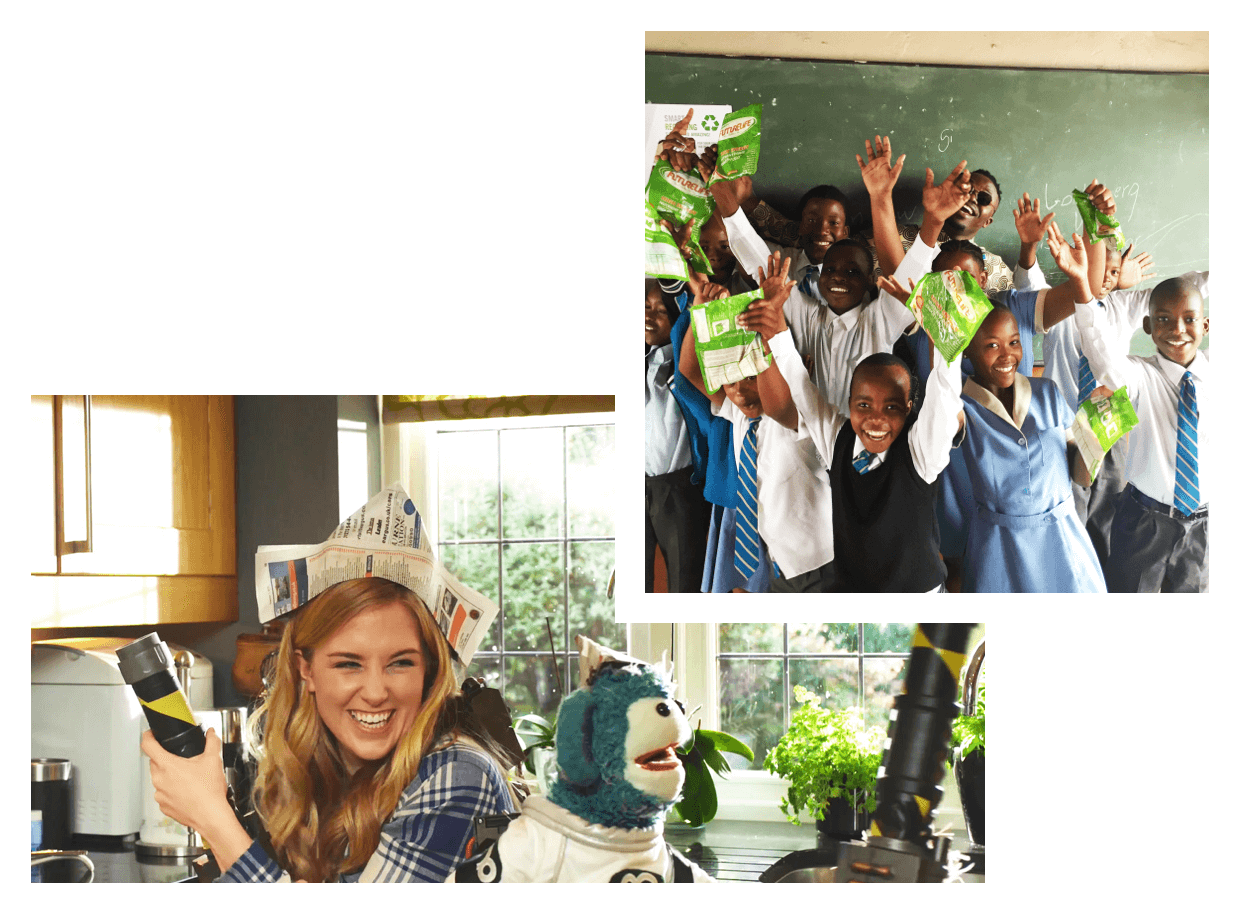 Wastebuster and WRAP team up to deliver a multi-lingual ‘Home Recycling Challenge ‘fronted by Captain Busta and much-loved celebrities. 222 local authorities register to take part and more than 16,000 Wastebuster children get Wastebusting with their families to show pester power in action!

Captain Busta is invited to Asia, Africa and the Middle East to spread the recycling message.

Wastebuster works with international cross-sector partners on the Virtuous Circle project in South Africa where multi-layer food aid pouches are recycled into school desks and Captain Busta works with the brilliant and inspirational music artist, Tresor, Sony Music and Moonlighting Film Studio to make a movie about food waste and recycling plastic into school desks for schools in South Africa.

Wastebuster works with international cross-sector partners on a project to collect hard to recycle plastics from refugee camps, schools and communities in Jordan to turn them into useful items. Captain Busta’s speaks to children through movies in Jordan schools to help them understand why and how they can recycle.

Over 20,000 schools have now joined the mission.

Wastebuster brings together multiple stakeholders to share knowledge, technology and resources to improve coordination of sustainable development education on plastic waste, globally to launch a new educators pack on plastics for UN World Environment Day 2018. The programme and Captain Busta’s movie, Litter Things Matter is translated from English into Spanish, French, Arabic, Chinese, Hindi and Russian and viewed by 1.3 million people, in 16 countries, in 65 cities, in 4 days.

We have lift off. The real mission has just begun. Please join us! 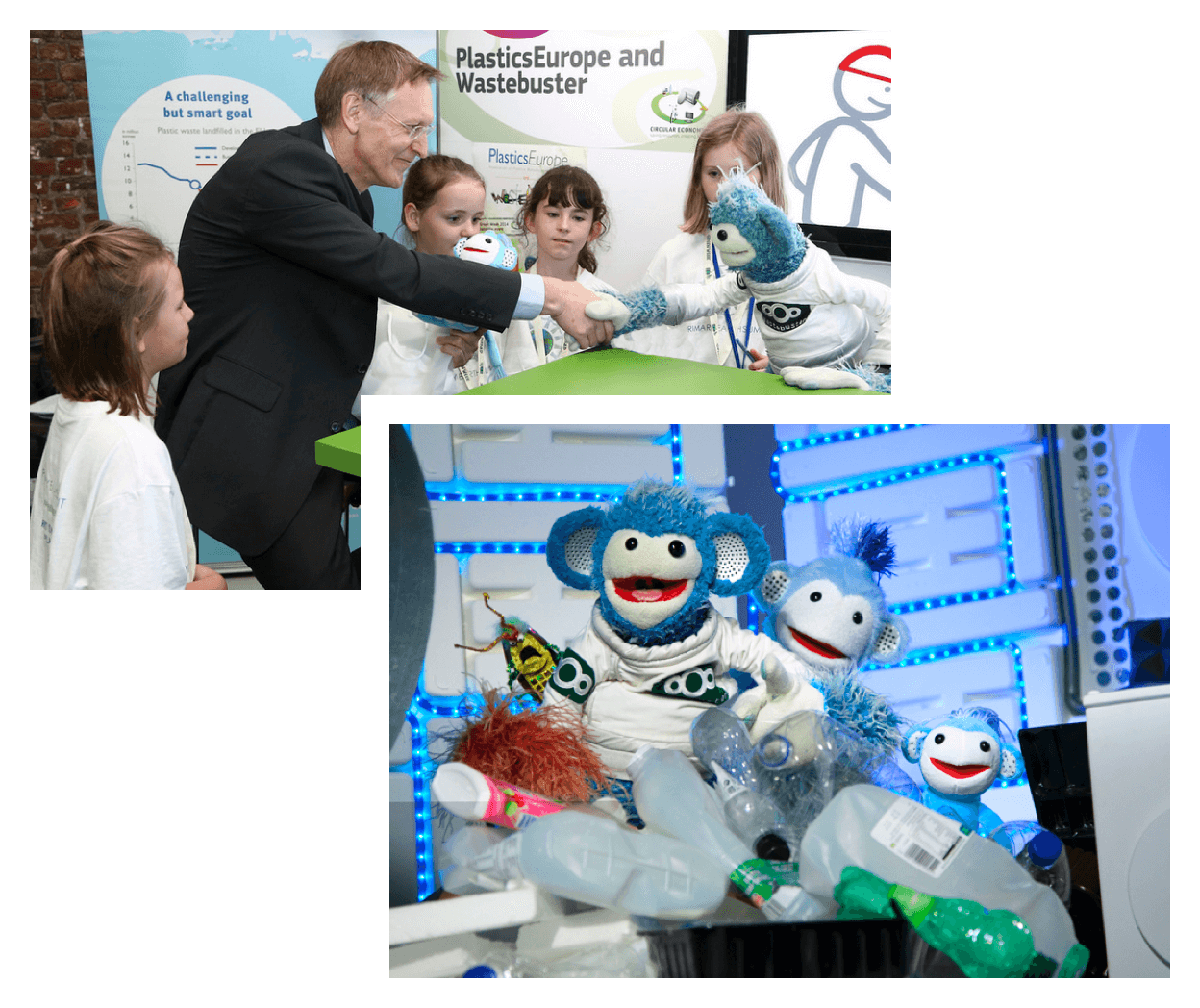